This document is archived on the internet and can be consulted at the following address: http://www.ecolo.org/archives/archives-nuc-en/

The First French EPR will be built in Flamanville (Normandy) 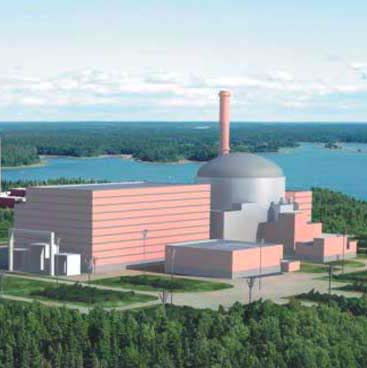 Apologizing : the EPR being a French reactor, the literature available about it (including some of EFN's documents) is mainly in French. Some of the links proposed below may therefore be in French. To translate these documents to English, if necessary, you can use the free Google-automatic translation service at http://www.google.fr/language_tools?hl=en

EDF has confirmed the site where will be built the first French EPR (EUROPEAN PRESSURIZED REACTOR). It will be Flamanville, in Normandy, where two pressurized water reactors of 1330 MW each are already in operation..

The sites of Tricastin (on the Rhône river) and Penly (in Seine-maritime, on the seaside) were also candidates to host this new EPR. It was however preferable to install the reactor on the seaside (which eliminated Tricastin), and as concerns the site of Penly, Laurent Fabius, a local political leader, former Prime Minister and member of French Parliament, had campaigned against the EPR together with the Greens, which probably played against Penly.

The President of EDF (ELECTRICITE DE FRANCE, the world's largest electrical utility, which owns and operates all of France's 58 nuclear reactors), Pierre Gadonneix, has confirmed the choice of Flamanville on thursday 21st october 2004, after a board meeting of EDF.

This decision had been delayed since many years and was becoming urgent. See about this subject the schedule for the EPR.

In 2005 and 2006, administrative procedures will take place, before the construction starts in 2007.

The reactor should be in operation by 2012.

The 58 existing French nuclear reactors, are to be replaced starting in 2020 This lead-unit EPR reactor is meant to validate the new EPR concept and design, before building a series of EPR's to replace the 58 existing reactors. The EPR is not a revolutionary reactor, but an optimized version of the pressurized water reactors in operation today, who already work very well and are quite clean and very safe.

The French National Safety Authority (Autorité de Sûreté Nucléaire - ASN) had authorized the EPR project to proceed on October 5th, indicating that this reactor includes significant improvements compared to existing reactors. The EPR has better safety systems, is more competitive, reduces the amount of waste produced and lowers the exposition of nuclear workers to radioactivity.

Constructing the EPR will take 5 years. But beforehand, there are 2 years of administrative procedures, and to test it properly before constructing a series, the EPR needs to operate at least until the first refuelling period, which requires another 18 months to 2 years. Adding up these time spans, one realizes that 2004 is the deadline if we want to have EPR's constructed by series, tested properly, and the following units on-line in 2020, This decision was therefore quite urgent and needed to be taken nowadays.

Humanity continues to reject into the atmosphere 800 tonnes per seconde of CO2 which contributes to the greenhouse effect. Each EPR such as the one to be built in Flamanville will spare 4 million tons of CO2 from being rejected into the atmosphere every year.

Constructing this EPR in Normandy is good news for the local environment in Normandy, good news also for the country and for the planet. This will help preserve France and Europe from being too greatly dependent of imported oil. While warfare continues in Irak, Saoudi Arabia is more unstable than ever, and English natural gas production, which used to help Europe not to be totally dependent on the Persian Gulf, is now starting to decline this year.

The EPR is a EUROPEAN project, putting together the best European technologies. Born from the very start of a Franco-German cooperation (between Framatome and Siemens, now united in Areva), the first EPR was bought in 2003 by Finland, a country with a high reputation of ecological consciousness, and is planned to be operating in 2010. The new EPR in Flamanville will be owned and operated by a european consortium comprising, in addition to EDF, several other partners. Belgium, Spain and Italy, among others, seem to be interested and are considering a participation in the consortium.

The financial investment (cost of building the reactor) will be about 3 billion euros. This may seem to be a large amount, but the reactor will produce huge quantities of high-value clean killowatts on-demand : 1600 megawatts, thereby amortizing the investment in a reasonably short time span. Chine, for example, has bought two 900 MW nuclear reactors built by Framatome at Daya Bay (which started operating in 1993 and 1994), the construction cost of which was covered by the sales of the electricity produced in far less than ten years of baseload production, and these reactors will now probably continue producing until they are about 50 years old, if not more.

While the price of fossile energies (oil, natural gas, coal) continues to soar, the EPR is becoming highly competitive. It is not only a reliable source of cheap electricity, much cheaper than fossile fuels, it also makes France more independent of oil and of the emirs of Arab States which are more unstable than ever. The Persian Gulf concentrates two thirds of the remaining cheap oil reserves in the world.

The French EPR is not subsidized by the French authorities or other hidden subsidies (contrary to renewable energies, which should also be developed, but produce only minute quantities of energy, in an inconstant manner, and cannot be developed without strong and continued financial backing). The region and Département de Basse Normandie, to attract the EPR reactor on their territory in the competition between the three sites, have agreed a local professional tax exemption for the new EPR reactor of 100% the first year, 80% the second, 60% the third, 40% the fourth and 20% the fifth year. This fiscal gift will amount to 70 million euros in five years. This is only a marginal advantage for EDF compared to the investment cost, but nevertheless demonstrates the motivation of the region, of the Département de Basse-Normandie and illustrates the support of local politicians to the project.

Developing all clean energies, including nuclear energy, is necessary, useful, and more urgent today than ever before. Nuclear energy is the only energy available capable of replacing in two or three decades a significant proportion of today's fossile energies. However, even a massive developement of nuclear capacity in the world will not suffice to face the planet's energy needs when oil will run short.

Some dreamers and anti-nuclear organizations pretend that building more windmills would be a better solution for France than an EPR. Click here to discover how many of the most modern windmills (twice as high as the cathedral of Paris) are needed to replace an EPR such as the one that will be constructed in Flamanville.

The United States, China, India, Japan, Korea, Russia, and Finland (among others), are running nuclear today or planning to go nuclear again, in part because of nuclear energy's environmental advantages.

EFN totally approves the wise decision taken by the French Government and EDF to build the EPR.

EFN has in fact strongly contributed to the preparation of this positive decision to build the EPR since several years, by informing the public about the benefits of clean nuclear energy and the necessity of an EPR, by our interviews and articles in the news media, through our mailing list in French language, our web site in French (www.ecolo.org and click on the French flag, or just click here), our participation in public debates, our lectures given throughout France (several hundred lectures given all around the country since EFN was created). Our goal is now to develop and duplicate EFN's actions in as many other countries as possible. If you are willing to help us in this regard, please contact EFN.

About the EPR, see for example the script of my radio interview on RMC (one of the biggest radio stations in France) discussing the merits of the EPR with Corinne Lepage in november 2003 (Corinne Lepage is a notorious anti-nuclear lawyer and political personality in France).

EFN was also the NGO who contributed the most in the "National debate on energies" which was held during the first semester of 2003 in France, paving the road for the National Energy Law in 2004, defining the major energy orientations for France in the next 30 years. In total, about 40 different events, expositions and lectures were orgainzed by EFN to inform the public in thie context of this National Debate.

It is essential to produce electricity cleanly, and to free our world from its addiction of burning oil and fossile resources, whilst oil reserves are already significantly depleted. To avoid a major crash of our modern societies when oil wells around the world start running dry, humanity should rapidly undertake what France has done in 1973 : at least produce its baseload electricity with clean nuclear energy. In the meanwhile, France and existing nuclear countries will need to replace the existing reactors when they arrive at the end of their service lives. The next step, beyond electricity generation, is to get rid of oil for transportation. We are lucky enough to have several solutions at hand : hydrogen/fuel cells (the hydrogen being produced by nuclear reactors) and in the very short term, developing electric vehicles (well adapted to short distances such as commuting) or hybrid vehicles such as the Toytota Prius (for longer distances). The storage capacity of the batteries of electric vehicles have much improved in the recent years and their range is now above 200 km (more than enough for most commuters and small local use such as driving the kids to school).

For more information on nuclear energy, on the EPR, or its competitors such as the AP1000 or AP600, you may refer to our "documents" section (in English) on the web site. There, you will find hundreds of documents, including some exclusive ones, in a dozen languages, about energy and the environment. You will also learn about other new types of reactors, renawable energies, natural radioactivity, energy concservation, the rapid depletion of oil reserves, and much, much more, all this for FREE (just visit the web site) !

Sincerely and ecologically yours,

How many windmills would be necessary to replace just one EPR ? (source : EFN, 2004)

Bruno Comby, EFN founder and president (http://www.ecolo.org ), is a well known Euorpean environmentalist, the author of 10 books published in 15 languages on healthy living, ecology and energy, including the bestseller "Environmentalists For Nuclear Energy".

EFN - For complete and straightforward information on energy and the environment

To subscribe to our mailing list, the only condition is to share our point of view and to type in your e-mail in the box above. You will then be informed automatically of EFN's activities. This subscription is entirely GRATIS. EFN is a not-for-profit organization. It does not place any commercial advertisements on it's web site, and does not sell it's mailing lists to anybody. To help the EFN continue its activities, inform the public, and maintain this FREE service, you can subscribe or make a donation to the association. Your donations are tax-deductible in France. For subscriptions and donations intended for EFN-USA, click here (for our American readers and US citizens, donations in US$, EFN-USA is a 501(c)(3) tax-exempt not-for-profit corporation). For donations in Japanese Yens (for our Japanese readers), click here.

© EFN, all rights reserved - Unless specifically mentioned otherwise, reproduction, use or distribution of these information, texts or images, without EFN's prior written approval, is forbidden